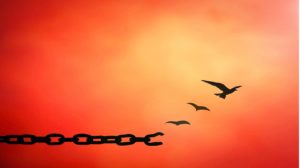 “If we really want to love, we must learn how to forgive.”

Is there anyone you’re holding a grudge against and having difficulty letting it go?

I get it – I’ve been there. Several years ago my sister and I got into a massive fight just minutes before interviewing my lead expert for a summit I was hosting. She said some things that shook me to my core.

I was stunned and shocked thinking, “Are you kidding me? You know I’m about to do one of the most important interviews of my life and you’re choosing NOW to bring all this up?” I was trembling with anger, my mind was frazzled and I was so hurt…but as I put on my lipstick I told myself to push it aside and pull it together!

And with the grace of God I was able to in that moment.

But once my interview was over it all bubbled right back up even bigger than before – the whole horrible experience kept playing over and over again in my mind – I wasn’t able to push it aside. I told the rest of my family and all my friends every little detail of what had happened, playing my victim role to the hilt and spiraling down into a vortex of blame, judgment, and self-pity. Ugghh, not something I’m proud of today but at the time, I felt justified.

Ever happen to you? Ever fall into the rabbit hole of righteousness and claim the “I’ve been wronged” role with a vengeance?”

Although it’s easy to do, it sure doesn’t make you feel very good does it?

After a few weeks of sleepless nights, lack of focus and an upset stomach this situation was taking its toll on me. I clung to the belief my sister should apologize, but that apology never came. Sound familiar?

I was tired of feeling so ugly inside and knew I had a choice – I could stay stuck in my story and all twisted up inside OR I could empower myself to shift out of it by healing the hurt.

The idea of forgiveness started to surface but to be honest I didn’t want to forgive her, even though I wanted to feel better.

Have you ever been there? Eeeesh it’s no fun, is it?

Ever wonder why forgiveness is such a tough thing to do especially when we most likely know that forgiveness puts us on the road to more love and freedom.

Primarily, it’s because many of us equate forgiveness with allowing or letting someone off the hook for wrongdoing. We think that by forgiving someone, we’re saying that what they did was okay.

Forgiveness can look like we’re condoning the other person’s behavior along with the hurt and pain they’ve caused us. It’s easy to get fooled with the thought, “Hey if I forgive him/her for hurting me I’ll just be setting myself up for more of the same.

The truth is when you hold resentment toward another you are binding yourself to that person or condition with an emotional link that is stronger than steel. Your freedom rests on dissolving that link and the only way to do that is with forgiveness.

So, in actuality, when we are able to forgive, we release ourselves from the bondage of the anger, hurt, resentment and possibly deep-seated pain we carry inside. Those feelings can keep us stuck and unable to move forward in our lives. For instance, if a past relationship caused you tremendous pain, you may be unconsciously sabotaging potential new relationships because you’re emotionally unavailable as you try to protect yourself. By not being able to release and let go of what happened in the past, you keep yourself closed off from the love, joy and happiness you most desire.

How can you move on without believing you’re condoning what’s happened in the past? Well, first, when you forgive someone, it doesn’t mean you have to continue to have a relationship with them. In fact, you never have to speak to them again-ever! It also doesn’t mean that when you say the words, “I forgive,” all is erased as if it never happened.

What is important to do, however, is to see the hurt you’ve experienced in a new light. It means connecting to and expanding that part of you that has never been hurt or harmed and can never be anything less than all-that-is. It means taking your past hurt to a new place…maybe even seeing the light AND the flaws in those that have “done you wrong,” with a measure of compassion for them.

I opened to this experience a few weeks into feeling so badly. It was Easter Sunday when I was sitting in church and asked God to lift this hurt from my heart and voila! I was instantly given a vision of my sister – she looked like an angel – and my journey of forgiveness began as I was reminded she is really a luminous light being. Within a few months I reached a place of peace and compassion.

Forgiveness gave me a new perspective that allowed me to see my part in this terrible tangle – and yes I did have an equal part in it. One of the biggest insights I had was that I could have chosen not to engage – that would have ended things before they got out of hand.

Although I don’t wish for anyone what I went through, I wish for everyone what I learned and gained from this experience.

The process of forgiveness is simple, but that doesn’t mean it’s easy or quick. And it does not mean you ever allow this to happen to you again. To be able to truly move on, it can be extremely helpful to follow one of the processes I used to arrive at a place of forgiveness.

There are seven steps to follow to get there:

The result of forgiveness is the ability to feel safe opening and receiving as well as feeling incredibly peaceful, out of which flows natural feelings of affection and love towards yourself and others. And from that new place of expansion come peace, abundance, balance and a GREAT life. So, go for the good life. You deserve it!

As far as me and my sister…we’ve rebuilt our relationship and it feels darn good!!!

PS – If you are at a place where you want more freedom – where you know forgiveness, and letting go of resentments and hurts would move you forward into a happier life, take a look at Soul Sparkle Retreat